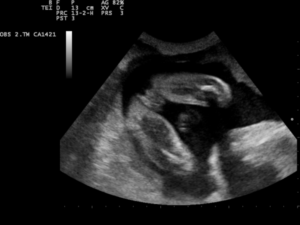 Many moms-to-be don’t need an ultrasound in the third trimester, but if you’re over age 35 or your doctor wants to closely monitor your baby’s growth, you may get one or more before baby is born.

(Other reasons for third-trimester ultrasounds include low levels of amniotic fluid, bleeding, and pre-term contractions.)

How many ultrasounds do you have in your third trimester?

In your third trimester (28 weeks through the end of your pregnancy), you’ll most likely have a checkup every two weeks from 28 to 36 weeks, then switch to once-a-week visits until you deliver.

How many times do you have an ultrasound during pregnancy?

Usually, a woman gets a minimum of two sonograms during her pregnancy, one in the first trimester and one in the second trimester.

Can too many ultrasounds harm your baby?

What months do you get ultrasounds during pregnancy?

At what weeks do you get ultrasounds?

You may have an early ultrasound at your practitioner’s office at 6 to 10 weeks to confirm and date the pregnancy. Or you may not have one until the standard midpregnancy ultrasound between 16 and 20 weeks. That’s when you may learn your baby’s sex, if you like.

What is a high risk mother?

A high-risk pregnancy is one in which either the mother or the fetus has a high risk of death or disability as a consequence of one or more conditions that complicate the normal pregnancy process.

How many times do you get a ultrasound during pregnancy?

What tests are done in 3rd trimester?

These tests are common in the third trimester of pregnancy: Group B streptococcus screening: Vaginal and rectal swabs are taken at 35 to 37 weeks of pregnancy to detect group B strep bacteria.

Which ultrasound due date is most accurate?

How accurate is the ultrasound examination? The earlier the ultrasound is done, the more accurate it is at estimating the baby’s due date. Ultrasounds performed during the first 12 weeks of pregnancy are generally within 3 – 5 days of accuracy. The most accurate time is between 8 and 11 weeks gestation.

Your baby’s heart beats with a regular rhythm. The arms and legs grow longer, and fingers and toes have begun to form. At the end of 8 weeks, your baby is a fetus and looks more like a human. Your baby is nearly 1 inch long and weighs less than 1/8 of an ounce.